I knew very little about my third great grandfather, initially.  I suppose that’s the case with most ancestors, really.  What I mean is that he is one for whom I only had a name and dates from my grandma’s pedigree chart, but even grandma wasn’t sure about the name.  She had written down that he was John Alexander Slaymaker Springer, but she told me that she wasn’t sure about the second middle name.

I started my search looking for John Alexander Slaymaker Springer who had been born circa 1836 and died circa 1919.2,3,5,6,7,9,10,14,15  I knew from the chart that he was married to Mary Lindley and had a son named Frank.4,5,6,7,9,10,15,16,17  I began where I usually do when I have a name and approximate dates.  Census records.  I found John A. Springer living with John S. and Lamira Springer in Paoli, Orange County, Indiana in 1850.3  The names I had for his parents on the pedigree chart were John Slaymaker Springer and Susan Lamira Nichols.1,2,3

I then found John A. with his wife, Mary on the 1860 and subsequent census.5,6,7,9,10  All of this was research I had done years ago, before FamilySearch.org was on my radar.  Ancestry.com didn’t have any vital records for John A., so I stopped my search and moved on to a new person.

Last year, I decided to look for John A. on FindAGrave.com.  To my delight, not only was there a photo of his tombstone, but there was also a photo of him!

By this time, my library had purchased a subscription to NewspaperArchive.com.  As I was researching Frank Springer, I widened my search to include his parents.  What I found was surprising.  There were several articles in The Paoli Republican about him, all dated near the time of his death.  The first reported that he was over 80, though he didn’t look it, and he had cataracts in both eyes that he was planning to have removed when the conditions were right.11  The second reported that he was looking to sell seven stands of bees.12  I knew he was a farmer.  I did not know he kept bees.

The third article reported that he was seriously ill.13  The fourth article was an obituary and an administrator’s sale notice.15

Obituary for John A. Springer, The Paoli Republican, Wednesday, 21 May 1919, p. 4, column 1. NewspaperArchive.com

The last two articles were land sale notices, which gave the legal description of his land.  These articles also named four of his eight children:  Anna L., Frank, Charles B., and John A., Jr.16, 17

One of my ongoing projects has been to scan all of the photos and documents from the Rakestraw trunk at my grandparents’ house.  As I was doing this, I came across a letter, written by John A. Springer and addressed to Mrs. Rakestraw (Mary E. Rakestraw, whose daughter married John’s son, Frank).  This letter was dated in 1891 and was sent from Madisonville (now part of Cincinnati), Ohio.  In it, John talked about his regret in moving to Ohio and how homesick he was.8  This was an amazing find!  Since we have no 1890 Census, I would never have known he had moved.  By 1900, he was back in Paoli.9

I also came across a letter he had written to his granddaughter, which had a letterhead, and an envelope with a printed return address. 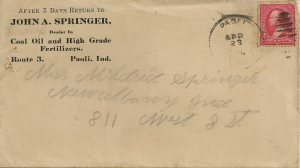 In addition to farmer and bee keeper, he was also a dealer in coal oil and fertilizer.  It was certainly nice to learn all of these new things about him, but I think my favorite thing about reading these letters was hearing his voice and getting a sense of his personality.

Mary Lindley is another ancestor that has always fascinated me.  If I’m being honest, they all have, but I think everyone has a handful that are especially interesting for one reason or another.

As if the confusion over her bloodline and her children weren’t enough, there seems to be confusion over her middle name as well.  On the pedigree chart that my grandma gave to me years ago, she is written in as Mary Lumire Lindley.  Now, I’m what some people call a name nerd and unusual names are of great interest to me.  Why Lumire?  I looked into it and could not find a logical explanation.  I looked at other pedigree charts on several different genealogy websites and also found her middle name given as Lumiere, Lamira, and Lamiah.

Knowing that records were often written by other people listening to the pronunciation of a name, I can see how these could all sound the same with the regional accent.  The interesting thing is, I have yet to find her middle name on any official record.  She is always Mary or Mary L.  I began to look at the names on their own merit.  Lumire and Lumiere are not names that I’m familiar with, however, lumière does mean light in French.  I don’t believe the Lindleys have a French connection.  Lamiah (or Lamia) is from Greek mythology and would have been a possibility.  However, the Lindleys were Quakers and I don’t believe they would have used a name from Greek mythology.  This leaves me with Lamira.  Lamira was a name first used circa 1613 by John Fletcher in his play The Honest Man’s Fortune.  The name rose to popularity in New York in the 1780s and the popularity had probably spread west by the mid-1800s.12

In the absence of a document with a middle name on it, Lamira will be the name I pencil in on my charts.  As always, I’ll keep looking for proof.

GeneaBloggers
Getting to Texas