I haven’t done much research on my Irey line.  Syntha Irey is the only one I’ve thoroughly researched.  This week’s 52 Ancestors in 52 Weeks theme of “Where There’s a Will” prompted me to research Syntha’s father, Phillip Irey.  I have a copy of his will from a probate record and I’ve never done anything with it other than to use it as one source for Syntha’s marriage to Charles Rakestraw.  I began to follow the other clues in the will and was surprised at how much information I found in just a few hours.

The first thing I noted was that Phillip named children and grandchildren in his will, but not his wife.  I surmise from this that she must have died prior to the writing of the will, which was on August 22, 1841.  In the 1840 Census, Phillip was between the ages of 80 and 90.  There was a tick mark in the corresponding column on the female side, which was presumably his wife.  The 1840 Census enumeration began on June 1st, so it seems that Phillip’s wife died sometime between June 1, 1840 and August 22, 1841.

The next thing I noticed was a legal description for land in “Fort Wain,” Indiana.  I’ve been working with deeds and abstracts a lot lately at work, so that just jumped right out at me.  I did find a deed for Phillip Irey who purchased land matching that description in Fort Wayne, Indiana on August 20, 1838.

I also found a deed for land that he had purchased in Bucyrus, Ohio on April 5, 1836.

Next, I decided to run through the names of the children.  All of his daughters were married by the time he wrote his will, so this gave me a bit more to go on, knowing their married names.  I managed to find marriage records for all of his children (John, Isaac, Dawson, Sarah, Susannah, Jane, Eli, and Syntha) on FamilySearch.org.

Since Phillip bequeaths a portion of his estate to the children of Susannah and Jane, I am fairly certain that they had both died before August 22, 1841.  It also appears from the language of the will that Dawson was not expected to live long.

The Quaker records pertaining to Jane and Eli were probably the most significant find of the night.  Jane Irey married Joseph Paxson, and Eli Irey married Joseph’s sister, Rachel.  Presumably, the Paxsons were Quakers, since they are the ones listed in the book and Jane and Eli show up merely as spouses.  The Meeting records give lots of good information.

From this, I know that Phillip’s wife was Hannah Brown.  Eli Irey was born January 1, 1800 and died in August of 1882 and is buried in Hartford County, Michigan.  Not much can be learned about Jane Irey, other than she was the first wife of Joseph Paxson.  This also gives a lot of information on Joseph Paxson, his siblings, his parents, and even the names of his grandparents.  A fantastic find!

Syntha was born on April 8, 1803.  Her father was Phillip (or Philip) Irey of Butler Township in Columbiana County, Ohio.  She married Charles Rakestraw on December 6, 1821.  The couple and some of their children moved to New Albany, Indiana sometime between 1832 and 1840.  I’m still not sure how many children they had, but I have been able to prove eight and have leads on two more.  Syntha died of consumption on December 11, 1849, and was buried at Fairview Cemetery on the 17th.  I don’t know whether or not she originally had a tombstone, but she currently shares a stone with her daughter, Rebecca Dowerman, who died in 1901.

The first piece of documentation that I ever found for Syntha was the 1850 Mortality Schedule, on which her name is spelled “Sintha.”  I had only “known” that she was married to my Charles Rakestraw because of a pedigree chart that my grandma had given me years ago. 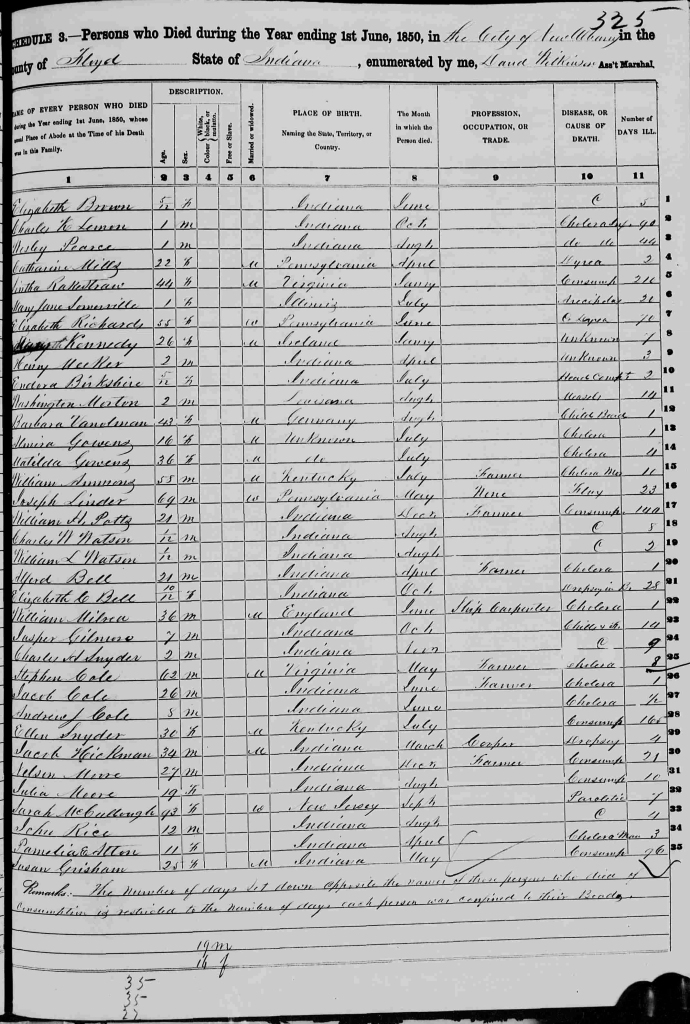 With a piece of evidence in hand, Sintha is how I spelled it until someone saw it on my Ancestry tree and sent me a very nasty message about how I was spelling Syntha incorrectly and that I should have more respect for my ancestors than to spell their names incorrectly.  Luckily, this didn’t turn me off to genealogy, but it did turn me off to having a publicly viewable tree on Ancestry.

The next record I came across was the marriage record for Charles Rakestraw and Sinthy Irey.  Now, my grandpa always used to pronounce Missouri as miz-ur-ah and Sunday as sun-dee, so I can see how Sintha might have become Sinthy.  I still couldn’t figure out where Syntha had come from, though.

The next piece of the puzzle came when I borrowed the Rakestraw box of paperwork from my grandpa so that I could scan it all into my computer.  Among the papers was a copy of Phillip Irey’s will, which appears to have been part of a probate record.  For some reason, whoever copied it was only concerned with the will.  In the will, Phillip names his daughter, Syntha Rakestraw.

At last, I knew where Syntha had come from!  One day, while working, I came across a roll of microfilm labeled Fairview Cemetery Records, 1841-1864.  I thought this strange because the Southern Indiana Genealogical Society had indexed all of the Fairview Cemetery record books and their first index started in 1852.  So, like any history/genealogy obsessed, mystery loving librarian, I put the roll on and started to scroll through it.  I took note of some names and dates, doing a random sampling.  One of the pages that I happened to stop on was an interment record for a Mrs. Rakestraw who had been buried on December 17, 1849.  Even though this record said the cause of death was “old lady,” which actually made me picture an old lady beating her to death with a purse, and Syntha had died of consumption, I was sure this had to be her.  I included her name and interment date on my sample list.

I began to go through the books on the cemetery index shelf to see if anything matched my sampling.  I finally found matching names in Persons Buried in the Ground by the City of New Albany, which was a transcription of records for burials at the State Street Burying Ground that were later moved to Fairview, and early Fairview burials.  Unfortunately, this didn’t clear up the Sintha/Syntha issue.

Then, last year, I decided to research my Rakestraw line to prove that they were here before December 31, 1840 to get a certificate from the Southern Indiana Genealogical Society’s First Families Program.  In so doing, I had a hard time proving that Milton was the son of Charles and Syntha.  I had to use a lot of siblings to prove connections.  One of the records I used was Rebecca Dowerman’s death record.  She was Milton’s sister, and her death record listed her parents names as Chas. Rakestraw and Cynthia Irey.  Cynthia.  Well, I guess I can see how that happened.  The informant may not have really known Rebecca’s mother’s name, or they might have said Syntha and the clerk heard it differently.  We all know how easily names can be butchered.  I still had no second source for proving how to spell her name.

After I had completed the research for the First Families Program, I made plans to go to Fairview and try to find Syntha’s tombstone.  My dad went with me.  He said he remembered visiting a bunch of ancestor’s graves with his mom and he thought he could remember where they were.  We did find a tombstone for Rebecca Dowerman with Cyntha Rakestraw also listed on it.  So, now I also had Cyntha in the mix.

A different name for every source.  In case you are having a hard time keeping track, here are the variations:

GeneaBloggers
Getting to Texas